Skip to content
I returned from a vacation in May and decided I would not let happen what happened last year. It was one year between vacations. I took off a day here and there to make several long weekends, but it wasn’t enough. I found myself tired, depressed and angry. Then winter arrived. Normally winter is a speed bump but this winter lasted well into March. We received a late snow of several inches and continued freezing and below freezing temperatures. Lake Erie was over 95% covered by ice that remained as deep as 36-inches. The cold temperatures and grey skies caught me by surprise and threw me into a depression which left me wishing I had started a medication.
Shortly after returning from vacation, I planned a four day trip to the Adirondacks. Nancy was unable to get the time off so this vacation was to be about me.
I arrived several hours ago. Work followed me by choice. The decision to engage in work is sometimes a difficult one. Do I review several patient charts daily which might take me 20-30 minutes or do I wait until I return and potentially have 3-4 hours of work? When I break the equation down to those, the decision becomes easier. I’ll complete the work daily. 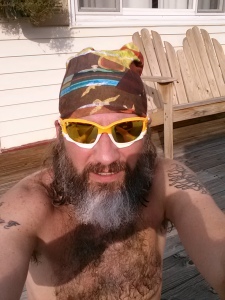 I arrived at the Lone Birch, logged into the EMR and got the work out of the way. I changed and went for a very hilly,very hot run. It is after all the Adirondacks. As I train for my first ultra, I learn the practice of walking as part of my run. This is difficult for someone who grew up in the 60’s and 70’s with a very conservative work ethic. My father used to say, “Never get caught doing nothing.” As a result, the thought of walking during a run has, in the past brought pangs of guilt. At 51 there’s no way I could handle the heat and the hills. Perhaps one of these items but certainly not both. Today, there was no guilt. I t is what it is and I am OK with that decision. 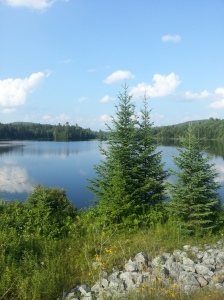 I finished the run feeling not exhausted but surprisingly refreshed. Tomorrow shall be another run before a hike up Goodnow Mountain.
Namaste